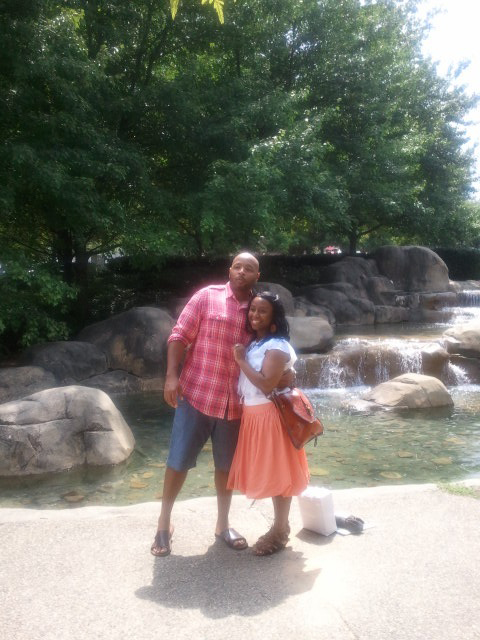 This is a proposal that is so romantic and thoughtful, I asked my client, Shaw if he could please give me the details from his special day. He tells the story so well; I’m going to let him tell you his story. Grab a tissue! This is what he wrote:

The preparation started a few months prior. After reaching out to her parents, I settled on the perfect date. With her parents help, I was able to secure pictures of Keisha growing up through the years. I also had my own stash of sentimental items that encompassed a lot of our 1st adventures and outings together ( i.e. receipts, programs, pictures etc.).

On Friday, 30 August 2013, Keisha’s parents arrived in Atlanta from Chicago. I met up with them and took them down to Centennial Olympic Park. I showed them where I would like for them to be the next morning. When we arrived back at their hotel, I gave them two items that were part of the proposal. First was a shadow box that had items from the first time we went to a particular restaurant, papers from our first international trip and other mementos. The second item was a book. The book had pictures of both of us growing up, our families and where we met. I included captions below the photos expressing what love means to me and how she has been an instrumental influence in my life.

Keisha’s parents and a really close friend sent a text message to let me know when they were in place. I initially told Keisha we were going to the Aquarium. Over the past three years, our plans to make it to the Aquarium have been postponed due to scheduling conflicts so she was excited to hear that we were actually going to make it this time. I told her I wanted to take the scenic route through the park. As we were walking through Centennial Park, I was telling her that I was working on a project and that I finally finished it. As we continued to walk, we were coming upon a nice shaded area with a tree and a bench. Her mother was sitting on the bench but from a distance Keisha could not tell who it was. She mentioned a strange lady kept staring our way smiling. As we got closer to the area she could clearly see that the lady was actually her mother, and her father was next to her holding the shadow box. She was surprised that her parents were there considering she was just complaining about not being able to see them for the holiday since they told her they would be in Pennsylvania. 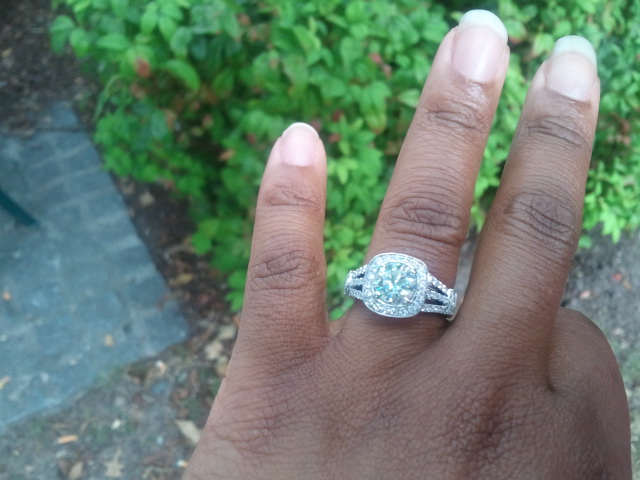 As we walked over to her parents, I started talking about what was in the box and that since she is always making creative things for me I wanted to do the same for her. She sat down on the bench and her mother handed her the book. The book is entitled “Love Is “. As she turned the pages of pictures of us growing up she started to cry and held the book high over her face in an attempt to hide her tears. On the last page of the book it reads ” The next question is ?????” . I was down on one knee explaining how much she meant to me and asked her to marry me. After she finally removed the book from in front of her face she was able to see that I was on one knee, and she tearfully said yes!

Then she looked at the beautiful custom crafted ring from Ascot Diamonds in Atlanta and forgot about everything else that happened prior.